My Cart (0) Total: $0.00
You have no items in your shopping cart.
Menu
Personal menu
My Account
Filters
Search
Close
Menu

On June 18, 1998, they opened the doors to their first location, totaling just 2,100 square feet (including the warehouse and sales floor) inside the Almeda Mall, with only Owner & CEO, Sam Zavary and one other employee. After 16 months of hard work and dedication, a second location was opened in southwest Houston.

The second location, originally at Gessner and Southwest Freeway, was somewhat larger at 7,000 square feet as customer demand, as well as satisfaction, grew. In just over a year of determination and increased sales, the southwest location expanded by more than double to 18,000 square feet in December of 2000.

In February 2001, Exclusive Furniture began expanding its marketing strategy to television. Soon, “Super Sam” took over the television airwaves with his trademark slogan “Where Low Prices Live! ”The increased exposure allowed them to expand to a third location: this time in Northwest Houston.

In August 2001, the largest location at the time opened at 290 and Jones Road totaling 28,000 square feet. The Jersey Village location offered more space for customers to browse and a bigger selection. However, shortly thereafter, following the tragic events of September 11th and the economic downturn that followed the original location inside the Almeda Mall shut down in March 2002. Over time as the economy recovered, Exclusive Furniture once again opened their original Almeda Mall location, this time in a 19,000 square foot building.

The years following showed rapid growth with the Southwest store moving to its current location at 6900 Southwest Freeway (at Hillcroft). Since then, a satellite store at West Oaks, three flagship stores in Humble, Richmond, and Cypress, as well as a clearance center have opened. 2019 saw the expansion and remodel of the Southwest location (bringing that location from 23,500 square feet to 42,500 square feet) as well as the opening of a brand new store in Webster. The remodel added an updated kid’s play area and café which are signature features of each flagship store.

More than just a commercial success, Exclusive Furniture prides itself on being community-focused. For example, when Hurricane Katrina hit the neighboring state of Louisiana, the owners and employees of Exclusive Furniture helped the city of Houston welcome those affected by the hurricane. Subsequent years saw more community efforts such as donating 1,000 mattresses and over $60,000 worth of water and cleaning supplies. They also held a clothing drive and donated $15,000 to Lakewood Church as part of their Hurricane Harvey efforts.

As part of their continued community focus Exclusive Furniture often works alongside charitable organizations donating furniture, money, and time to help those in need. Examples of these partnerships include: 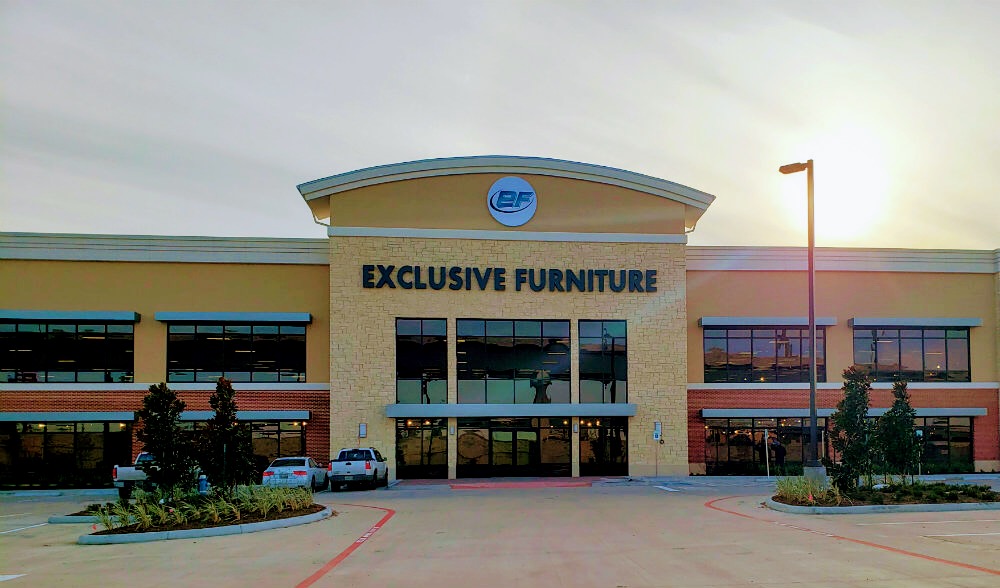 Though the past 20 years have brought much success to Exclusive Furniture, they have never lost the heart to give back to the community. Being family owned and operated keeps them grounded with a sense of kinship for the locals who have supported their business since the beginning.

Style things up with our
Best Seller Recliners online Interested in finding a financial solution for your home furnishing needs? We've got you covered! Submit your application today and we'll find out what financial solutions are available to you through our network of trusted lenders. Once your application results are returned to us, a sales representative from the store of your choosing will contact you within 24-48 hours.

Interested in a no credit needed solution for your home furnishing needs? We've got you covered! Submit your application today for approval. Once your application results are returned to us, a sales representative from the store of your choosing will contact you within 24-48 hours.

Exclusive Furniture has seven beautiful locations across Metro Houston to serve you. Spanning over 335,000 square feet of showroom space, you can rest assured our team will help you find the right furniture at the right price. We offer convenient financing options for every situation because, at Exclusive Furniture, we're dedicated to making sure everyone can enjoy something special in their home.

Great customer service!! Sebastian at the location off of 99 was amazing and very patient. He was set in making sure I got everything I needed. He was so accommodating that when I went back to get more furniture I made sure to ask for him specifically.

All the associates there were super nice and welcoming. Arthur was the guy who helped us chose our living room couch set. He was extremely helpful and knowledgeable about the products in the showroom and it’s online/warehouse.

Bought a new sofa and love seat. My wife and I were greeted by a great salesman named Demetrius. No high pressure sales, took his time and explained and answered all of our questions and concerns. Highly recommend Exclusive Furniture. I can't remember the manager's name but he provide some great insight when it comes to selecting furniture. Big props to Exclusive Furniture.

We had gone to several furniture stores during Memorial Day weekend to furnish our new home. Everywhere we went told us that it would be weeks before our furniture was delivered. We stopped at exclusive furniture in Humble and loved the selection they had. We were given refreshments and they took great care of us.

Great experience! The sales associate was Ishelle ,she was so helpful and professional! She was so great during our first visit and purchase we went a second time to purchase a bedroom set and again she made our experience just perfect!! We will be going back !! My husband and I love the quality of the furniture at Exclusive Furniture!!

I’m so glad that I found this store! They have soooo many nice choices and the best part is that almost everything is in stock! I found two pieces that I wanted online, ordered in store and drove straight to the warehouse to pick it up. Seamless process. Whenever I need furniture or decor, I’m checking Exclusive first!

This was the most absolutely amazing online experience!!! I’m moving from Dallas to Houston so I put in a request for a consultation @exclusive furniture. Michelle responded within a timely manner. I told her what I was looking for. She sent me some options, answered all my questions, and showed me the furniture by video.

The salesman- Cardell is why exclusive Furniture is my only furniture to go to. He made the experience of buying a furniture less stressful. The quality and selections at exclusive is better than all other furniture company.